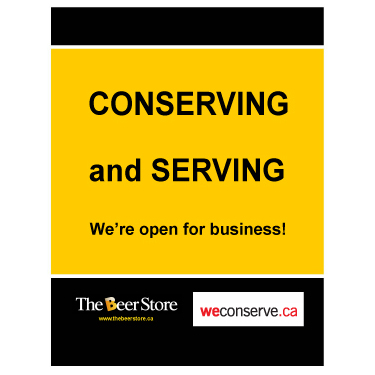 It’s every organization’s dream – a major donor who believes in your mission, provides core funding, and helps promote your programs.

In 2004, The Beer Store was looking to consolidate its in-store coin boxes into one box and three charities: one selected by the employees union, one to reduce drinking and driving, and one environmental. They selected the Conservation Council of Ontario because of its province-wide mandate and scope, but also because the conservation message fit well with The Beer Store’s deposit-return system and its commitment to energy conservation. 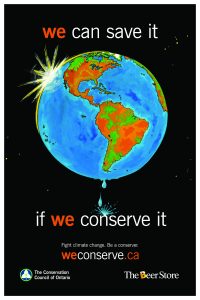 The Beer Store became a major sponsor of the We Conserve campaign, a partner in the Doors Closed campaign. It also ran promotional posters in its 450 retail stores across the Province.

The Council was also able to support The Beer Store where it was demonstrating conservation leadership. In particular, I participated in a media event to celebrate the return of the billionth bottle under the Bag it Back program to recover all alcoholic beverage containers across the province.

In these days of budget cuts and ever tightening constraints on funding, it is becoming increasingly important to develop synergistic relationships between green businesses and green charities. It is increasingly becoming a focal point for building the new climate action movement.